The truth is, the late Elinore Siminovitch never walked in anybody’s shadow; not once in her life; not ever. Those who knew her well knew that for certain about her. They also knew that very few people cast longer shadows than Lou Siminovitch, her husband and one of the key figures in 20th-century medical science.

She chose a life of quieter brilliance, a life rich with great books and great plays, and critical, deep and creative thought; a life she defined and designed for herself; and a life that she succeeded at by her own definition.

To say that there would be no Elinore and Lou Siminovitch Prize in Theatre without Elinore is more than just a statement of the obvious. For one thing, her husband would not lend his name unless hers was there as well. And while it is true that love of theatre ran as deeply in one as the other, this was a world in which she felt especially at home – a world she understood, in heart as well as mind.

On the most symbolic of levels, the marriage of Elinore and Lou Siminovitch – a true story of lifelong love and exquisite companionship – was indeed a wedding of the arts and the sciences. Here was quite literally living proof not just of mutual co-existence but of a full-fledged embrace; of how the artist and the scientist complement one another.

In the scientist part of his life, Dr. Louis Siminovitch played an instrumental role in some of the most important medical discoveries of the century – the genetic causes of muscular dystrophy and cystic fibrosis, for example – and made critical contributions across a spectrum of human genetics and cancer research.

He co-founded and co-developed three of the most outstanding research labs in Canadian history. He taught medical biophysics at the University of Toronto, and later chaired both the Department of Medical Biophysics and the Department of Medical Genetics. He has taught and influenced at least two generations of biomedical researchers and is widely appreciated as a superb mentor who challenges all around him to strive for excellence. He has been honoured by his peers – a Flavelle Gold Medal from the Royal Society of Canada, a Wightman Award from the Gairdner Foundation – and by his country: an Officer and then a Companion of the Order of Canada.

Elinore was in her late 30s when she judged the three Siminovitch daughters to be grown up enough to more or less make their own way in life, and took up the craft of playwriting for herself. She would write some 30 plays in her time, nearly all of them focused on sociopolitical issues, and written from a feminist perspective. A number of these works, not surprisingly, are drawn from the lives of some of the most outstanding but unsung women in history.

A few of those plays have been performed and continue to be performed on high school and university stages, but Elinore Siminovitch would never achieve anything approaching commercial success. And yes, that was disappointing. “My mother wrote for the sheer joy of writing,” the middle daughter, Kathy Siminovitch, says in a short memoir, and she honestly wasn’t interested in fame. “But like any artist, she would have loved a much greater opportunity to see her plays come to life.”

As a result, Kathy says, her mother “would have been delighted to see not only excellence in drama being recognized, but also a newcomer in the field of drama being afforded the opportunity to see their work recognized and brought to the public eye.”

One of the things Elinore Siminovitch understood in her heart and her mind was that those who choose the theatre largely resign themselves to working far too hard for much too little remuneration and much too little recognition. And that they deserve a lot more of both. This is captured in and reflected by the Elinore and Lou Siminovitch Prize in Theatre – an award, in Kathy’s words, “that respects the ideals of both of our parents.”

Elinore Siminovitch was born in Poland and immigrated to Montreal at age five. She studied languages in Montreal and Paris and following the birth of her three daughters started to write short stories.

Her first short stories were sold to CBC Radio and one of her earliest plays was produced on the Montreal television program Telecast. Although never abandoning short stories, she decided to concentrate on plays when her editor suggested that her excellent dialogue would be better suited to the stage. Her writing career spanned 1962 to 1994 and included over 30 plays with productions or readings of twelve in Toronto, Ottawa and Montreal. Her themes included feminism and sexual stereotyping as illustrated by Big X Little Y, which won the Ottawa Little Theatre’s Playwriting Competition, and was produced at Glendon College, at Montreal’s Playwrights’ Workshop Theatre and in numerous high schools across the country. One of Toronto’s early feminist theatre companies, Redlight Theatre, opened its 1975 season with her Strange Games. In Little White Lies, part of Toronto Free Theatre’s Playreading Series, she tackled the political values and moral dilemma of Eleanor Marx, Karl Marx’s daughter.

Her script for A Man in the House, a winner in Theatre Ontario’s first Playwrights Festival, garnered a cheque for $5,000, a certificate presented to her by Pauline McGibbon and a production of her work at Harbourfront. Set in Montreal during the Depression, A Man in the House, concerns a woman struggling with the political pressures of the times.

Jewish themes were central to some of her works. A Matter of Survival, commissioned by B’nai B’rith, drew on Holocaust themes; The Answer, told the story of a young scientist who joins the Communist Party and eventually defects to Russia; and Hannah, was the story of the life of Hungarian resistance leader Hannah Senesh. Hannah was the first winner of the Canadian Jewish Playwriting Contest and was produced posthumously by the Jewish Theatre Committee of Toronto.

Elinore Siminovitch died in Toronto in 1995. 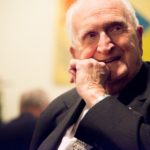 Louis (Lou) Siminovitch was born in Montreal in 1920 to parents who had emigrated from eastern Europe. As a student he excelled in mathematics, and won a scholarship in chemistry to McGill University, earning a doctorate in 1944. He simultaneously studied literature and credits his English courses with the development of a love of language and writing. After a period with the National Research Council’s atomic energy project in Ottawa and Chalk River, he chose to switch his studies to biology, and locale to Paris, a city selected as much for its vibrant cultural life as the academic challenge of the Pasteur Institute. Collaborating with some of the greatest biologists of the century, he began his pioneering studies on the regulation, structure and function of viruses that grow in bacteria; this work contributed an essential building block in the understanding and treatment of cancer. During this period Lou discovered the power and fascination of genetics that would guide his future career.

Returning to Canada in 1953 to join Toronto’s Connaught Medical Research Laboratories, he cultivated a new interest in mammalian cell biology. By 1956 he was attracted to the team at the newly created Ontario Cancer Institute at the University of Toronto, dedicated to a multidisciplinary approach to cancer research. He then became a staff member of the Department of Medical Biophysics, serving as its first Chair from 1969 to1972. He remained at the University as a Professor from 1976 to 1985, teaching and mentoring two generations of biomedical researchers in Canada.

From this foundation, Dr. Siminovitch assumed a key leadership position as one of Canada’s most renowned medical scientists and scientific builders. He played seminal roles in building research medical capacities, particularly in genetics, at important institutions; the Hospital for Sick Children from 1970 to 1985, and the Samuel Lunenfield Institute at Toronto’s Mount Sinai Hospital from 1983 to 1994, and at the Rotman Research Institute at the Baycrest Centre for Geriatric Care, where he continues as an advisor.

During his career, Dr. Siminovitch served on both public and private medical boards, received numerous honorary degrees, edited many professional journals and was a founding member of five international journals. During his remarkable five-decade career, he published over 200 papers, reflecting his pioneering work in the fields of virology, stem cell differentiation and haemopoiesis, somatic cell and molecular genetics and cancer. His awards and achievements include a Royal Society Fellowship (England), 1991; the Izaak Walton Killam Prize, 1981; the Gairdner Foundation Wrightman Award, 1981; the Flavelle Gold Medal for the Royal Society, 1978; Officer and Companion of the Order of Canada, 1980, 1989. He was inducted into the Canadian Medical Hall of Fame, 1997 and named a foreign associate, and the only Canadian, to the National Academy of Sciences in 1999.

Lou Siminovitch died in Toronto in 2021.