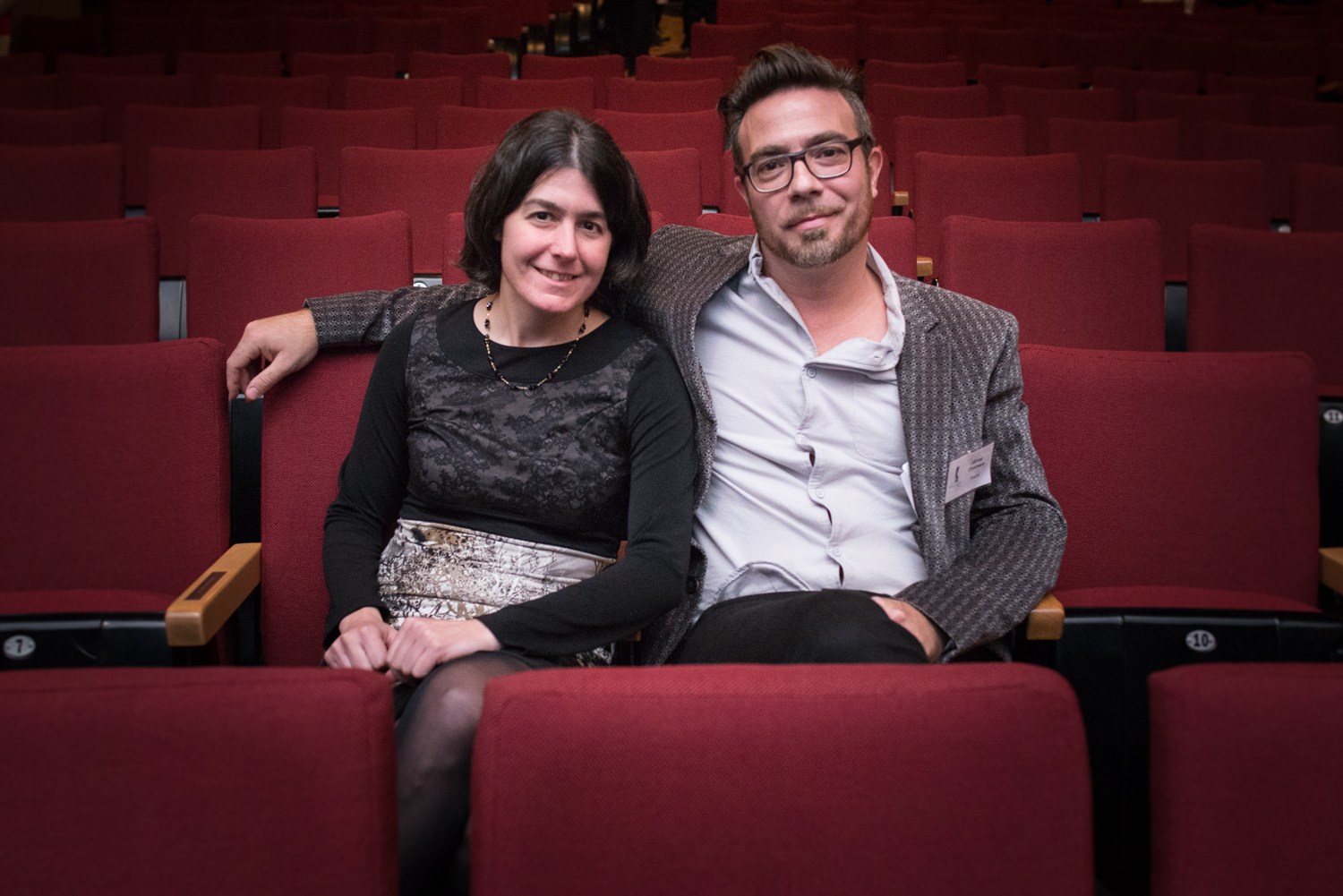 Click below to read the recipient and protégée speeches

Before a packed Hart House Theatre at the University of Toronto, Montreal playwright Olivier Choinière was named recipient of the 2014 Siminovitch Prize. For his protégé he has selected Annick Lefebvre of Montreal.
“In awarding the 2014 Siminovitch Prize to Olivier Choinière, the Jury has acknowledged the astonishing and daring originality of this writer and the ways in which he seems destined to not only leave his mark on Canadian theatre, but to somehow transform and renew it,” said Jury Chair John Van Burek. “Olivier Choinière draws wisdom and inspiration from his elders yet he is already a beacon to a rising generation of playwrights.”

Olivier Choinière graduated in Playwriting from the National Theatre School in 1996. He first made a name for himself with Le bain des raines (1998) followed by Autodafé, created by André Brassard in 1999. Félicité was created in 2007, and subsequently done in English at London’s Royal Court Theatre, under the title Bliss, in a translation by Caryl Churchill. It has since been performed in English Canada, Scotland, Australia and Switzerland. Venise-en-Québec (2006) and Nom de domaine (2013,) were both short-listed for the Governor General’s Award. Mommy (2013), won four awards at the Cochons d’or gala, in addition to being a finalist for the prix Michel-Tremblay. Olivier Choinière directed 50 actors in Chante avec moi (2010), a play that won a prize from the Association Québécoise des Critiques de Théâtre, before going on to play at the National Arts Centre, the Festival TransAmériques and the Théâtre du Trident. His latest play, Ennemi public, will be created in February at the Centre du Théâtre d’Aujourd’hui. The Canada Council has recently awarded him the prix Victor-Martyn-Lynch-Staunton in theatre.

When asked about his initial reaction to the news, he replied, “Thank you to the Jury members and to all who work for this extraordinary prize. Over and above the money or the time and means it provides, the real significance of this prize is this: to encourage the pursuit of an ever greater freedom, among those few that last and endure.”

“At RBC, we have a long-standing tradition of supporting the next generation of artists,” said Rebecca Mooney, Vice President and Head, Brand and Marketing, RBC Wealth Management. “We believe in the power of mentorship and are proud to support the Siminovitch Protégé Award, which brings profile to exciting emerging Canadian theatre artists.”

Protégé Annick Lefebvre had this to say, “Since I have always seen theatre as a powerful tool of transmission between individuals of different generations, know that it is a pleasure and honour to be the Protégée of Olivier Choinière, playwright and practitioner whom I hold in the highest esteem, for the 2014 Siminovitch Prize. The mission of this prize is intrinsic to my own concept of theatre and urges me in turn to make every effort to mentor writers younger than myself, even as it gives an enormous shot in the arm to the development of my own creative projects,”

After graduating from UQÀM in 2004, Annick Lefebvre founded Le Crachoir (The Spittoon), a company that questions the role of the author at the heart of the creative process, as well as the process of production and performance of a work. She is the author of Ce samedi il pleuvait (It Was Raining That Saturday), a finalist for the 2011 prix Gratien-Gélinas and the 2013 prix Michel-Tremblay. In 2013-14, she was among the group of emerging writers in “Contes Urbains” at La Licorne. This season, she will be on stage at the Centre du Théâtre d’Aujourd’hui in the cast of 26 lettres: abécédaire des mots en perte des sens, a new play by Olivier Choinière, and the same theatre where her own play, J’accuse, will be directed by Sylvain Bélanger in April, 2015. Meanwhile, in France, her first play for adolescents, La machine à révolte, will be produced in Alsace and in Basse-Normandie. Annick is about to complete Prends-moi, which she is co-writing with Guiseppe Lonobile (Belgium) and Olivier Sylvestre (Québec), in addition to beginning work on Colonisées, her next dramatic projectile.

“Each year, since its inception in 2001, the Siminovitch Prize has turned the spotlight on exceptional Canadian theatre artists. The award has stimulated and enabled winners to push the boundaries of their craft, illuminated their work nationally and internationally, and has served as a springboard for the advancement of their careers,” said Dr. Kathy Siminovitch. “This Prize, and its protégé component, allows us to reflect on the importance of theatre to our country’s cultural life, the need of its artists for support, recognition and opportunities for risk-taking, and the incredible value of mentorship. We are delighted to support Canadian theatre artists with the help of our Presenting Sponsor RBC Wealth Management, and partners University of Toronto, Hart House Theatre and the Friends of the Siminovitch Prize.”

The other finalists for the 2014 Siminovitch Prize in Theatre are playwrights Michel Marc Bouchard, Hannah Moscovitch and Colleen Murphy.

About RBC’s Commitment to Community and Sustainability

Royal Bank of Canada (RY on TSX and NYSE) is Canada’s largest bank and one of the largest banks in the world, based on market capitalization. We employ approximately 79,000 full- and part-time employees who serve more than 16 million personal, business, public sector and institutional clients through offices in Canada, the U.S. and 40 other countries. For more information, please visit rbc.com. RBC is recognized among the world’s financial, social and environmental leaders and is listed on the 2014 Dow Jones Sustainability World Index, the DJSI North American Index, the Jantzi Social Index and the FTSE4Good Index. RBC is one of Canada’s Greenest Employers, and one of Canada’s 50 Most Socially Responsible Corporations.

RBC supports a broad range of community initiatives through donations, sponsorships and employee volunteer activities. In 2013, we contributed more than $104 million to causes worldwide, including donations and community investments of more than $69 million and $35 million in sponsorships. Learn more at www.rbc.com/community-sustainability.

About the Siminovitch Prize in Theatre