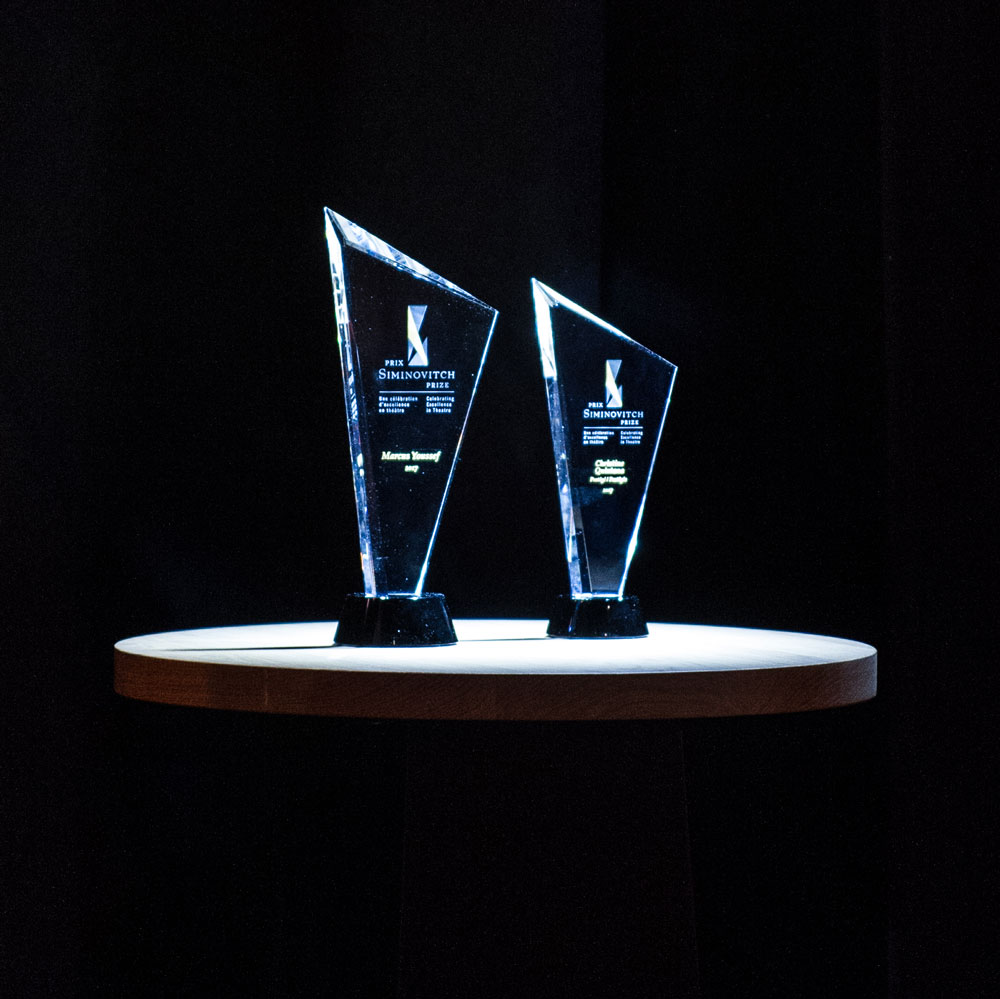 Prize will proceed, and will celebrate its 20th anniversary year and the  100th birthday of Dr. Lou Siminovitch

April 20, 2020 – OTTAWA (Canada) – The Siminovitch Prize, which celebrates its 20th anniversary this year, and the National Arts Centre have announced a call for nominations for the Siminovitch Prize, Canada’s most prestigious award in theatre. Despite these tumultuous times, both organizations are planning for the annual celebration of excellence and innovation in Canadian theatre to take place later this fall.

This will be a significant year for the Siminovitch Prize: in addition to the Prize’s 20th anniversary, Dr. Lou Siminovitch, a renowned scientist, turns 100 on May 1. The Prize was founded in honour of his values and achievements, and those of his wife, the late Elinore Siminovitch, who was a pioneering playwright.

“The Siminovitch Prize is the ultimate expression of optimism and faith in the art form of theatre. It is more necessary than ever, as it champions the vital role artists play in the well-being of society. Its transformative financial support and community recognition inspire recipients to make even greater contributions to our national story,” said Jury Chair Vanessa Porteous. “I look forward to seeing who will join its distinguished ranks this year; who will lead us into the future of theatre in Canada.”

Over a three-year cycle, the $100,000 Siminovitch Prize honours a professional director, playwright, or designer who is acknowledged as a leader in theatre and whose work is transformative and influential. The Prize also recognizes the importance of mentorship to support emerging talent. The recipient receives $75,000 and chooses a protégé to receive $25,000. This year, the Prize will be awarded for playwriting.

“The Siminovitch Prize, our country’s most lucrative award in Canadian theatre, has had an extraordinary impact on our cultural landscape. For 19 years the Prize has encouraged mid-career artists and their protégés to keep creating despite the challenges they might face. The Siminovitch Prize Foundation knows that this celebration—and the financial support the Prize brings—will be needed this year more than ever,” said Board Chair George Thomson.

“The National Arts Centre is proud to partner with the Siminovitch Prize Foundation on this important award that celebrates and champions some of the most extraordinary theatre artists in the country,” said NAC President and CEO Christopher Deacon. “We salute Dr. Lou Siminovitch on his milestone birthday, and express our gratitude to him and the Siminovitch Prize Foundation for their vision and generous support of theatre in Canada.”

“I am a deeply grateful laureate,” said Youssef, newly appointed to the Board of the Siminovitch Prize Foundation, along with theatre artists Ravi Jain and Duncan McIntosh. “The Siminovitch Prize allows Canadian theatre to stand proudly and visibly. It asserts contemporary Canadian theatre as a vital part of our national culture, and it loudly and boldly announces to all Canadians that the work of the remarkable nominees is at the heart of our national conversation about who we are and—in a time of great change and equally great fear—what kind of country we want to be.”

Nomination details can be found at the end of this release.

ABOUT THE SIMINOVITCH PRIZE
The Siminovitch Prize recognizes excellence and innovation in Canadian theatre. Over a three-year cycle, the Siminovitch Prize celebrates a professional mid-career director, playwright, or designer who is acknowledged as a leader in the theatre and whose work is transformative and influential. The prize was launched in 2000 to honour the values and achievements of the renowned scientist Dr. Louis Siminovitch and the late Elinore Siminovitch, a pioneering playwright.

ABOUT THE NAC
The National Arts Centre raised its curtains for the first time in 1969. A bilingual, multi-disciplinary home for Canada’s most creative artists, the NAC strives to be artistically adventurous in each of its programming streams — the NAC Orchestra, Dance, English Theatre, French Theatre, Indigenous Theatre and NAC Presents. The Centre’s national role is reflected in its motto: “Canada is our Stage.” The NAC collaborates with artists and arts organizations across the country, acts as a catalyst for performance; invests in ambitious new works by artists and arts organizations nation-wide; and nurtures the next generation of audiences and artists from across Canada. Situated on the unceded territory of the Algonquin Anishinabe nation, the NAC is accessible and welcoming to all, and offers a variety of free programming and events.

Eligibility
Nominations are welcome for playwrights who, through their body of work, have made a significant creative contribution to Canadian theatre and who are continuing to create work that demonstrates innovation and excellence. The prize jury has been charged with selecting a recipient who would most typically self-identify as “mid-career.” In other words, this is a prize for an artist whose career is perceived to be gaining significant momentum, rather than a “lifetime achievement” award. The Siminovitch Prize is intended to provide an artist who has created remarkable work with the freedom to deepen their practice and make an even more significant contribution to the field in the years to come.

Nominees must have at least ten years’ experience as professional playwrights and will have developed a marked personal style or artistic approach to their craft, vision, techniques, interests, and/or collaborations.

In addition, the jury will consider the following aspects of the artist’s work: originality, sense of evolution, growing maturity, continuing experimentation, impact upon audiences, and influence upon younger artists.

Eligible artists include those whose work is performed in either English or French in the not-for-profit or commercial theatre sector in Canada. Issues regarding the eligibility of nominees are decided at the sole discretion of the jury.

Full-time employees and board trustees of the National Arts Centre (NAC) are not eligible for the Siminovitch Prize in any year during which they are actively serving the NAC.

Nomination Procedure
Self-nominations will not be considered. Completed nominations should be submitted electronically by Monday, July 13, 2020 at 5 p.m. Eastern Time.

Click here for the nomination form. Additional questions can be directed to aimee@siminovitchprize.com

Selection
A national jury of distinguished members of the Canadian theatre community is chosen annually to select the Siminovitch Prize recipient. The jury chair leads the selection of the jury and presides over the deliberations. An announcement of the jury will be made in May 2020.

Copyright 2021 - All Rights Reserved. Developed by BFdesign Inc.
Back To Top
×
Search